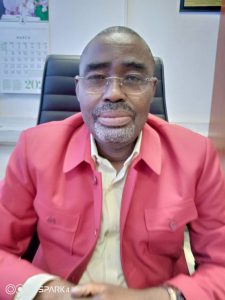 Dr. Hussaini Adamu was born on 22nd October, 1964 and hails from Niger State. He attended his primary education in Unguwar Gayan Primary School, Suleja 1971-1977; his secondary school in Government Science College from, Kagara 1977-1982; he obtained his M.B.B.S (Hons) in Usman Dan’fodiyo University, Sokoto from 1982-1989;. He got his Certificate of full registration as Medical Practitioner in Nigeria in 1991; and his Master’s Degree in Health Planning and Management from University of Benin, Benin City 2003.

Dr. Hussaini Adamu joined the service in 1991 as a Medical Officer and rose to the level of Director, (Procurement). He served in the following Ministries, Departments and Agencies (MDAs):-

He had five (5) publications/presentations and has also attended several workshops. He also served in various Ad-hoc Committees. He had special recognitions and awards.

He is skillful in the use of Microsoft word, PowerPoint, Excel, Leadership ability and management ability. He love reading, travelling/tour and sports.