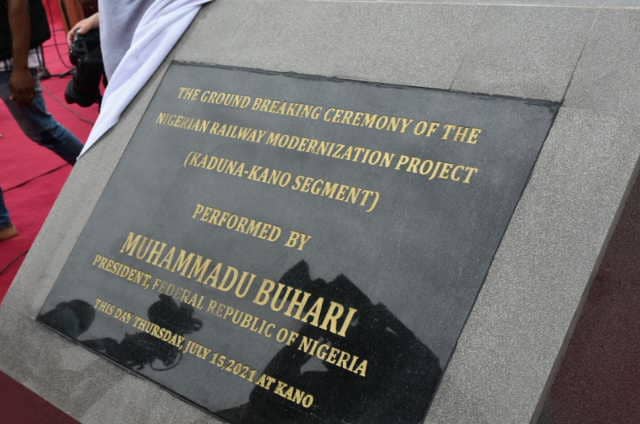 President Muhammadu Buhari has said that the recognition that rail transportation is a potent driver of the economy has led his administration to accord it the priority it deserves.

The President who made this known today in Kano at the ground breaking ceremony of the 203 Kilometers Kano-Kaduna Standard gauge railway modernization project said: “This administration recognizes rail transportation as a potent economic driver and as such, has accorded railway infrastructure development the greatest priority it deserves and it is not surprising that several landmarks have been achieved, from the flag-off for commercial operation of Abuja – Kaduna railway in 2016 to the recent commissioning of the Lagos – Ibadan railway project on June 10 2021, thereby maintaining the pace for the actualization of this vital thoroughfare.”

He further said the project: “signifies an important milestone of the construction of the third segment, having completed and commenced commercial operation on the first segment Abuja – Kaduna and recently the second segment Lagos – Ibadan”.

Still speaking, the President said the “project is crucial to the establishment of a supply chain in railway transport within its corridor, Kano – Kaduna – Abuja, as it links the major commercial cities of Kano and Kaduna to the Federal Capital Territory, Abuja.”

Earlier, the Chairman of Nigerian Railway Corporation Governing Board and Wazirin Daura, Engr. Ibrahim Alhassan Musa said: “This project has been planned to connect Kano, a major ancient commercial hub with Lagos, the nation’s commercial capital via standard gauge line.”

Also speaking, the Transportation Minister, Rt. Hon. Chibuike Rotimi Amaechi informed that Ibadan-Kano which is the remaining segment will transverse Oyo, Osun, Kwara,  Niger, Abuja, Kaduna and Kano and has been divided into three segments: Kaduna-Kano, Ibadan-Minna and Minna-Abuja.

The project which he said will allow the citizenry to transverse with ease, between Abuja and Kano via Kaduna will eventually link Kano-Maradi as well as link the seaports in Lagos to Maradu, providing access to the landlocked Niger Republic.

While enumerating the benefits of the project to include: improved standard of living, employment and trade, the Minister noted that in the long run it will decongest Lagos ports and increase the viability of inland ports of Ibadan, Kaduna and Kano.

In his goodwill message, the Kano State Governor, Abdulkahi Umar Ganduje thanked the President on behalf of the Kano people for the project and for many other federal projects cited in the State. He also thanked him for giving over 45 federal appointments to indigenes of the state.

Also delivering a goodwill message, the Ambassador, People’s Republic of China, Cui Jianchun, on behalf of the Gontractors, China Civil Engineering Construction Company, promised that the project will be executed on schedule while deploying best practices in its delivery.

The dignitaries present at the occasion were the Governor of Plateau State, Simon Lalong, Minister of Communication and Digital Economy, Isa Pantami, Minister of Defence, Bashir Magashi, Emir of Zauzau, Ahmad Nuhu Bamalli, Emir of Kano,  Aminu Ado Bayero, Directors of the Ministry among others.