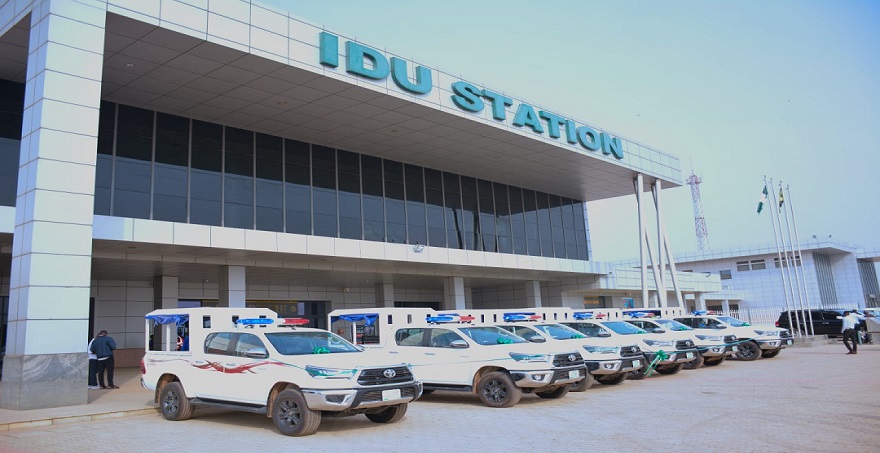 Speaking at the commissioning/handing-over ceremony, today at the Idu Train Station, the Minister of Transportation, Rt. Hon. Chibuike Rotimi Amaechi, who was represented by the Permanent Secretary, Federal Ministry of Transportation, Dr Magdalene Ajani, while presenting the keys of the patrol vehicles to the Managing Director, Nigerian Railway Cooperation, Engr. Fidet Okhiria, charged that they be used for the effective monitoring and surveillance of the rail corridor and its environs.

” We are all aware of the security situation in the country as a whole, so the Minister ( Rt. Hon. Chibuike Rotimi Amaechi) actually thought about the security architecture of the Idu-Abuja rail tracks and to increase the security apparatus of that route. And so, the Ministry had to procure these vehicles to support the NRC and the Nigeria Police working on that route to be able to effectively police that route. That’s why the Ministry procured these”, Ajani said

Speaking further on security, the Permanent Secretary said: “The security apparatus we have for most of the rail tracks has a number of components into it: you have the local people, the Civil Defense, Police Corps of the Nigerian Railway Corporation and we have locations where stations are, and we need the security men to be able to move from one location to another. In addition to the fact that we are also looking at surveillance Apps ( Application) and fibre optics equipment too”.

Still continuing, Ajani said: “But for the moment, for the security staff, you need these vehicles. The vehicles are not meant to be plying along the tracks, it’s just to aid what the security agents are doing. If there is an emergency call, they should be able to move from point A to point B, and may not necessarily be along the rail tracks.”

Responding, the Managing Director, NRC, Engr. Fidet Okhiria lauded the Federal Government for the support and pledged to put it to maximum use for the benefit of the citizenry.

Present at the occasion were: the Chairman, Governing Board of NRC, Engr. Ibrahim Alhassan Musa, Director, Rail Transport Services, Jimoh Yusfu amongst other top management staff of Federal Ministry of Transportation and NRC.